In 1866 Henri Nestlé, a Swiss pharmacist, established the world-renowned Nestlé brand amid a spirit of innovation and goodwill.

Our vision and values

The first Nestlé products arrived in South Africa during the 1870s, and the company’s presence in the country was formally entrenched on 7 July 1916 when it registered as a company.

To meet the demands of a growing country, local production started in 1927 with the purchase of the South African Condensed Milk Company Ltd factory in Donnybrook and the Estcourt and Franklin factories of Joseph Baynes Limited.

Condensed milk and milk powders such as Nespray began to be manufactured in Standerton.

More diversification came in 1947 when Nestlé merged with Swiss company, Alimentana SA. This signalled the birth of the popular MAGGI bouillon cubes and dehydrated soups, which soon became a household name.

Over the years Nestlé Zimbabwe has made substantial investments expanding and modernizing its operations to improve the  quality of its products, roll out new products and enhance the efficiencies of its operations. Some of these investments include commissioning a milk powder plant in 1961 to produce NESTLÉ NESPRAY and NESTLÉ LACTOGEN, launching NESTLÉ MOLICO - a low fat milk powder, and commencing the production of Sweetened Condensed Milk from fresh milk in 1965.

Driven by the need to fulfill customer demand, Nestlé Zimbabwe ramped up the rollout of new products with the commissioning of a Silkborg Roller Drier in 1973 to produce NESTLÉ CERELAC AND NESTLÉ NESTUM.

A year shy of two decades in Zimbabwe, in 1978 Nestlé Zimbabwe changed its name to Food Specialties (Private) Ltd, to reflect the change in the shareholding structure. Nine years later, in 1987 the name changed again to the current name - Nestlé Zimbabwe, after Nestlé Global acquired majority ownership. The name change was crowned with the launch of Nestlé’s most popular breakfast cereal brand – NESTLÉ CEREVITA, with the company launching two variants in Zimbabwe later that year.

In 1988, Nestlé purchased Rowntree, a UK-based company, which is one of the world’s largest chocolate and confectionery companies. This acquisition brought with it the South African company, Wilson-Rowntree.

The amalgamation of the two companies was an ideal match of strengths and resulted in a formidable presence in the marketplace. In February 1988, Nestlé South Africa (Switzerland) and Borden Foods Corporation (Columbus, Ohio), entered into agreements for Nestlé to acquire a number of Borden Brands’ international activities.

Due to these acquisitions, Nestlé SA further strengthened its presence in the milk market with the takeover of the entire business of Borden (Pty) Ltd, manufacturers of well-known international brands such as CREMORA and KLIM.

The formation of Dairymaid-Nestlé (Pty) Ltd in 1993, a 50% partnership with Imperial Cold Storage (Pty) Limited, marked the start of a formidable combination of expertise and branding, resulting in the development of innovative and quality ice cream products for the South African market.

The sunset of the nineties saw the company continue with its product diversification strategy with the launch of NESTLÉ EVERYDAY Sweetened Condensed Blend in 1997 and MAGGI Relish Mix and MAGGI Soups in 1998.

By January 2002, Coca-Cola and Nestlé announced that their global joint venture partnership, Beverage Partners Worldwide (BPW), was extended to South Africa. This expansion to the South African market signalled the introduction of Nestea Ice Tea, which has helped to grow the ready-to-drink tea category in South Africa.

Nestlé celebrated 90 years in South Africa. Nestlé’s presence in South Africa has resulted in a multi-million rand investment annually with purchases of milk and other raw materials. This in turn provides employment to more than 4 000 people and security for thousands of dependents.

In August 2012, then Minister of Trade and Industry, Rob Davies and Global CEO of Nestlé Paul Bulcke, inaugurated two new factories in the Babelegi industrial area, Hammanskraal, for the production of its breakfast cereals and noodles.

In February 2013, Nestlé South Africa sold a portion of its Waters business to Clover through a new entity formed by Nestlé and Clover, called Clover Waters.

In 2013, Nestlé Zimbabwe upgraded its factory with the commissioning of a MILO Production Plant and sachet filling machine. This was followed by the upgrade and refurbishment of its Ergon milk powder and creamer plant in 2015. During the same year, Nestlé Zimbabwe commissioned a Cereals Probiotic plant to produce Nestlé CEREALEC with probiotics. Later that year, the company completed the construction of its water treatment plant. 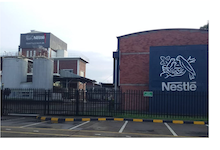 Today, Nestlé Zimbabwe plays a strategic role as part of the Nestlé East and Southern Africa Region (ESAR), a grouping of 23 countries. The Nestlé Harare factory produces a wide portfolio of products under two value chains – Dairy and Cereals. These products include brands such as NESTLÉ CEREVITA, NESTLÉ EVERYDAY and NESTLÉ CERELAC. Products produced at the Harare factory are both for the local market as well as exports into the SADC region.