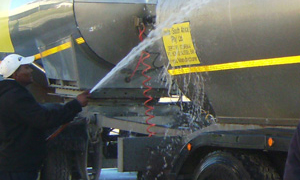 In 2010, the town of Mossel Bay in South Africa was experiencing its worst drought in 132 years, with Wolwedans Dam, the town’s main water source, at less than 12% full.

Through a water saving programme which had already started in 2009, our Mossel Bay factory in South Africa cut its water usage by 54% between October 2009 and May 2010.

The water-saving project consists of a four-pronged approach including an awareness campaign, measurement of water usage, an action plan and continuous improvement and advertising of the results. Under the initiative, a water usage measurement system monitors water in the various sections of the plant and corrective action is undertaken when necessary.

I am absolutely delighted at the water savings of more than 50% achieved by the factory and the way that responsible water management has been made an integral part of their operations. The Company has demonstrated what responsible corporate citizenship is. Alderlady Marie Ferreira, the Executive of Mayor of Mossel Bay.

The significant saving is due to the recovery and use of condensate from the evaporation process, which is recovered and used for various industrial processes on-site. In addition, several immediate water-saving measures were introduced, such as shortening automated wash times and modifying hosepipe nozzles to reduce water flow, and employees were also advised on water-saving measures at home.

Nestlé Mossel Bay Factory manufactures Powdered Milk (KLIM, NESPRAY and NIDO 1+),  Sweetened condensed milk, caramel treats, evaporated milks and dessert cream products.  The factory uses water  supplied directly from the local municipality. The main source of the town's water is the Wolvedansdam. The site purifies and reuses  water that is recovered from the milk during the evaporation process used  to manufacture our product.