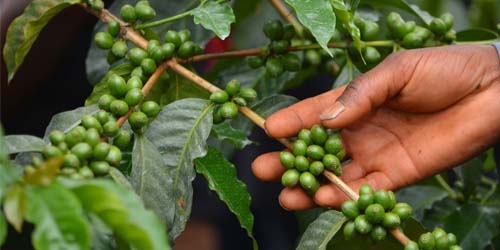 Coffee farmers aligned to the Nestlé’s Nescafé Plan programme in Kenya have received one of the best payout in 5years as a result of a sharp rise in the production of premium grade coffee which increased by more than 75percent in the 2016/2017 year.

Over 42, 000 farmers, who are part of the Nescafé Plan programme and members of 12 Farmers’ Cooperative Societies (FCSs) in Nyeri, Murang’a, Embu, Kirinyaga, Kiambu and Meru County, received a combined amount of Sh630million which was paid in May 2017 for a total amount of 7.3million kilogrammes of cherry that was delivered by the farmers.

Farmers from Karithathi FCS in Kirinyaga received the highest pay at Sh103 per Kg followed by Murue FCS in Embu and Kangunu FCS in Murang’a at Sh101 and Sh90.10 per kilogram respectively. On average the 12 cooperative societies paid their farmers Sh87 per Kilogram compared to an average of Sh42 paid five years ago.

Speaking during a visit to Murue Farmers’ Cooperative Society in Embu, Nestlé Equatorial Africa Region Head of Corporate Communications and Public Affairs, Ms. Brinda Chiniah commended the farmers for diligently following the training offered to them under the Nescafé Plan which was part of the reason for the increased production of premium grade AA, AB and PB coffee.

“Nestlé in partnership with Coffee Management Services (CMS) Ltd introduced the Nescafé Plan programme in Kenya in 2011 as part of our Creating Shared Value (CSV) after realizing that farmers were abandoning the crop and the quality of coffee produced then was plummeting. The programme aims to improve the quality and quantity of coffee production, connect farmers to market and improve the living standards of coffee farmers among others,” said Ms. Chiniah.

Between 2011 and 2016, the Farmers’ Co-operative Societies recorded 83percent rise in coffee production while the quantity of coffee produced per tree has increased from 2.5Kgs per tree in 2011 to 13Kgs in 2016 for farmers adhering to training offered in the programme.

“The programme has also incorporated a ‘Women and Youth in Coffee’ component to empower women and young people to farm and take up leadership positions in coffee farming and management. Currently, about 25percent of new farmers in Nescafé Plan are between 18 to 35 years and over 6,000 of the total farmers are women -which shows an increased participation of both youth and women,” said Ms. Chiniah.

Nestlé has been buying coffee from Kenya for over 40 years for use in the manufacture of Nescafé, Dolce Gusto, Zoégas and Nespresso brands. With the increased production Farmers’ Cooperative Societies have been connected to more markets where they directly sell outside the conventional weekly auction markets.

“To help the farmers become more food secure, Nestlé has entered into a public private partnership called FOSEK (Food Security in Ethiopia and Kenya) that is led by Solidaridad, and includes other partners like Coffee Management Services, the Coffee Research Foundation and others. The partnerships aim to improve food security of 70,000 coffee families across Kenya by 2020,” she said.

A baseline survey conducted before introducing the food security programme revealed that about 36.8percent of the coffee farming families become short of food for 3 months in a year, whilst at the same time having diets that have low diversity, typically being short of nutrient dense foods such as proteins, vegetables, dairy and fruit.

“Our ambition is to help improve 30 million livelihoods in communities directly connected to our business activities globally. By supporting farmers, their families and workers and helping their children to thrive, we build stronger communities. These communities can help us to ensure the supply of ingredients we need for our products over the long-term and that’s our fundamental belief in Creating Shared Value (CSV) as our way of delivering a long-term positive impact for shareholders and society, through everything that we do as a company.”