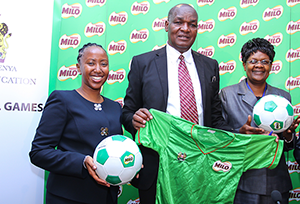 Nestlé Kenya through its MILO brand has once again partnered with the Ministry of Education to nurture young sporting talents by renewing its annual Sh5million sponsorship for the national finals of the Primary Schools’ Ball Games and Gymnastics.

This year’s ball games will be held in Machakos County from 13th to 15th April 2015.

“I am pleased to announce our MILO support in 2015 of up to KShs.5 Million for the seventh year in a row,” said Ciru Miring’u, Nestlé Kenya Managing Director. She added, “The MILO partnership with the Ministry of Education and the Kenya Primary Schools Sports Association (KPSSA) is in line with the brand’s commitment to sporting activities that teach positive values, shaping our children to become the well-grounded adults of the future.”

Nestlé Kenya has helped impact over fifteen thousand pupils by sponsoring the tournament annually making it one of the biggest public-private sector partnerships that is geared towards nurturing young talents in sports.

“In 2014, we additionally sponsored about 20 young boys to attend the MILO Soccer Championship in Nigeria while another 18 were sponsored in 2010 and 2011 to South Africa and Ghana respectively. The MILO Soccer championship held every two years, has given a rare chance to talented young boys from across Kenya to tour, interact and learn from other young footballers in the continent,” said Ms. Miring’u.

This year’s national ball games will bring together a total of over 1200 pupils and 200 officials from across the 47 counties. The games which earlier kicked off at the district level will now be staged regionally. Nairobi will participate as the Metropolitan region, Nyanza as Lake region, Rift Valley as Nakuru region, Coast as Mombasa region, Central as Aberdares region, Western as Nzoia region, North Eastern as Garissa region and the old Eastern Province as Northern region.

In addition to the Shs. 5million sponsorship, Nestlé Kenya will give a cup of MILO to over 1200 pupils and 200 officials in Machakos every day of the competitions.

Speaking during the announcement, the Ministry of Education Permanent Secretary, Dr. Richard Belio Kipsang said his Ministry’s ultimate vision is to help identify and nurture talent right from the grassroots level through the National Primary School games, thereby, providing children with an opportunity to discover and realize their dreams in life.

“Exposure of students to both curriculum and co-curricular activities like sports allows them to develop holistically, as required by the Ministry,” said Dr. Kipsang.

According to the Ministry of Education hundreds of children join prestigious national schools every year because of their sporting talents.

On her part, Ms. Miring’u added that Nestlé believes that sports play an important part in setting the foundation for a child’s future. “It is through participating in sports that children learn how to persevere, find courage, overcome challenges, engage in team work and believe in themselves,” she said.

MILO has been the official sponsor of the Ministry of Education Primary School Ball Games since 2008.